I just can’t stop eating Korean although my dentist told me to lay off on the spicy and salty foods for a bit as they are unhealthy for my gummies. I did do a break but I still sneaked in some Korean food loving but just not as often as before. This time while we were in Binondo for our regular trek, the mum, sister, little Z and me decided to eat some Korean at Lucky Chinatown Mall since we decided to check out the newest mall in Binondo. As mum already loves Korean food, she was all smiles as I decided to have some Korean food for lunch. 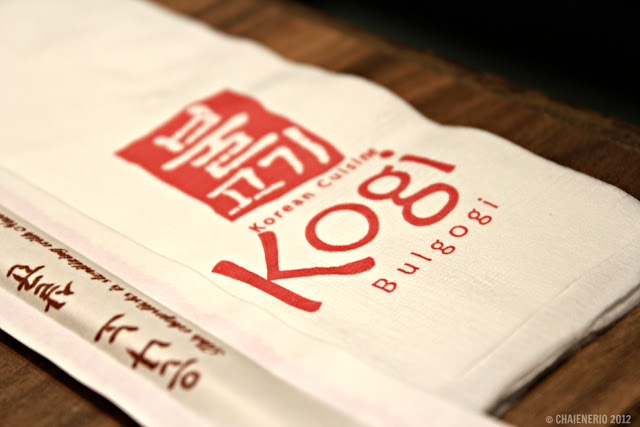 As we entered the restaurant, we were very welcomingly ushered to our table and the wait staff was very attentive and accommodating. I decided to steel myself for a little bit of flavor difference here since from what it looks like, Kogi Bulgogi is a Korean fast food chain and not really the small out-of-the-way-Korean-restos that I frequent with the ahjussi and ahjumma smiling and saying something to me in Korean. The set up was fastfoody! They had nice interiors though and lighting was perfect for taking pictures. Hehehehe!

After the wait staff took our order, we were then served some cold water and the obligatory banchans. To all those who are not so familiar with Korean food, banchans are the little side dishes that Korean restaurants give out to their customers. It is a very important part of a Korean meal and always given out freely especially their kimchi.

They gave us a total of 6 small portions of banchans but in other Korean restaurants the number could go up or down but always never below 4 in my experience. We had fried anchovies and these are cooked the same as some of us do locally – fried and added with a pinch or more of sugar to add some caramelization. Salty, crispy, fishy, and sweet is the way to describe it. We also had some sautéed tempura but they were nothing out of the ordinary for me. The sautéed bean sprouts were also ever present as was the pickled and spicy kimchi. They also gave us 2 new banchans I haven’t tried before – banana slices cooked with some sugar and a little bit caramelized and some pickled bitter gourd or better known as ampalaya.

Since they had Haemul Pa Jeon (seafood pancake) in their menu, I decided to try it out so we ordered it and also their fried rice. The Haemul Pa Jeon was really good and quite filling. I felt like the seafood components together with the egg were very well cooked and the dish wasn’t tasting like just made out of eggs. But I could really feel and taste the seafood component here. It was an appetizer but it could have been an entrée. The fried rice was quite delicious. Shrimps, egg, and some chorizo adorned the serving of rice we were given and it alone could have been a meal in itself. Think of a Chowking chao fan but better.

I then ordered some soup to go along with our meal since my mom requested it. Instead of ordering the usual Doenjang-Jjigae that I love, I decided to try something different and ordered Sundubu-Jjigae which was made out of really silky and soft tofu (which literally melts in the mouth), clams, squid, and port. This stew was really delicious. Spicy but tastes of the sea. The tofu was a great addition to the wholeness of the soup.

Mom also wanted to order some Bibimbap because I introduced her to this lovely and filling dish but we were both disappointed with the bibimbap that Kogi had. The bibimbap is not their best dish and we didn’t even finish this one because it left us quite high and dry. Since the little Z was around, I ordered some Korean style fried chicken. Theirs was a different version from the usual Korean restos I frequent. They had golden crispy fried chicken and although it was different from what I was used to, this really tasted good and the little Z loved it and we also loved it. Crispy and golden on the outside and soft and juicy in the inside is how I would describe the delectable fried morsel. We also ordered another main dish – Chicken Kalbi which is marinated chicken thigh with a sprinkling of sesame seeds and served together with some lettuce leaves, ssamjang (a mix of soybean paste and some other spices), gochujang (red pepper paste), and a thick syrupy sweet substance which seemed like a honey-based sauce.

Overall our first experience with Kogi Bulgogi was good and I will certainly come back again to try out their other menu offerings but I still think that nothing beats those small Korean restos with Korean ahjummas and ahjussis.