One night when my sister was here for a short break, we went out to this restaurant that I had wanted to try for a few months now. No surprise, it was a Korean restaurant which a friend had said is really authentic albeit the interiors of the said restaurant are not really that nice. My sister asked her high school classmates to accompany us as it's always better to eat out with a lot of people. More persons to share the bill and you can order a lot more of the dishes available. :)

My friends had told me the restaurant was in Burgos St. along Makati's supposed "red light" district. It was an unassuming very small restaurant which had a Korean proprietor and before you could get to the actual dining area, you had to pass through their prep area which was quite funny. Inside only a few tables were there like less than 10 and the capacity for this restaurant could just be around 20 max. The furniture was very simple. Plain wooden tables and chairs and some Korean writing on the wall stating their menu which I could not understand. The cashier, I think, was the owner's wife and she was watching the TV which was on the Korean channel quite avidly.

We were welcomed with warm smiles from the smiling Ahjussi (Korean respect word for an elder man) who led us to the big table which could comfortably seat 6. We were in total 5 so it was a fit. We were then given cutlery to use - steel chopsticks and the long spoon of which Korean diners normally use. There were also wooden chopsticks available upon request. 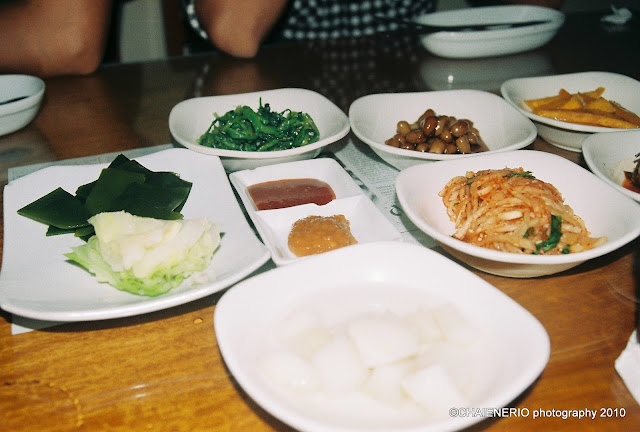 After we were seated, the waitress immediately served as a bunch of Banchan (Korean side dishes). Take note the Banchans were free and we could also ask for a refill once. That was something else. The Banchans actually made me a bit full. They had some sauteed spinach (Sigeumchi Namul), the ever familiar Kimchi, bean sprouts (kongnamul), white radish strips (Muchae), thin pancakes with spring onions (Pajeon), Korean-style potato pancakes (Gamjajeon), they also had what looked like Dilis (Filipino style small dried fishes) but these fishes were quite tasty. There was also some sweet potatoes in syrup and a few other things that were all good in itself. They were served together with some gochujang (red pepper paste) and soy bean paste which were the perfect condiments that night. 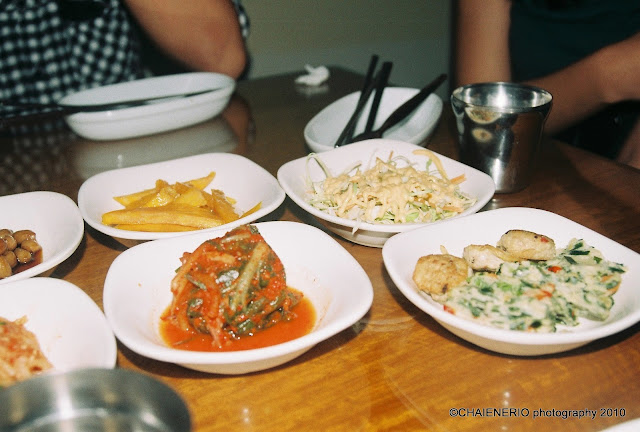 For our main dishes, we had some grilled pork belly (Samgyeopsal gui) Korean-style eaten inside a lettuce leaf with some sauteed green onions and gochujang and soy bean paste. This was delicious and I wasn't able to eat all of my rice. In fact I think I just ate like a quarter because I was busy concentrating on the Korean food. 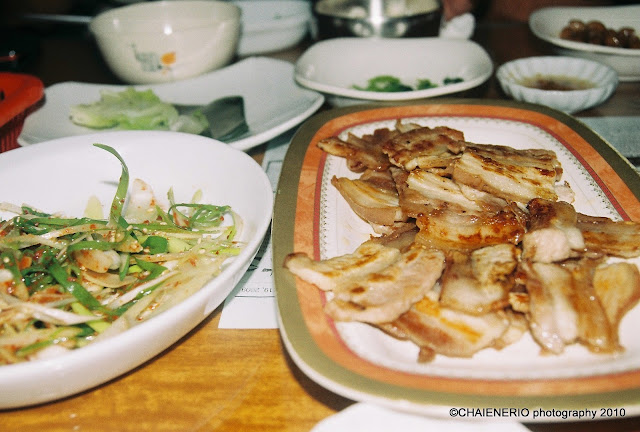 We also had some really spicy and sizzling chicken and of course the Bulgogi (strips of beef) which were really cooked nicely. We also had some Kimbap (Korean version of Japanese sushi). Overall I had a nice time and I also tried the soju as well. Soju is Korea's staple alcoholic drink, which for me was like vodka. Clean taste, high alcohol content. This worked well after the very very filling and tasty meal. Also it cools down the hotness in your mouth as Korean dishes tend to be on the spicier side. 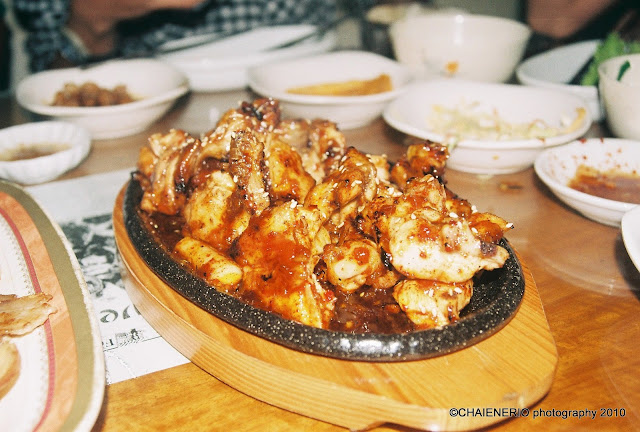 The restaurant actually doesn't have a name but you can find it on the first street to your right if you are coming from Makati Avenue and going along Burgos St. It is very unassuming with a little Korean lighted sign and the price is just right. If you want the experience of an authentic Korean restaurant, I'd say this little one is quite a find.

Price Range: Always good to eat in groups so you can have a variety of dishes and not at all expensive. For a party of 5, we each shared around Php200++ and we had a great meal!