Last January 21, I was invited along with other foodie bloggers as well as a few other guests to a food tasting event hosted by Lola Maria's restaurant at the Legend Villas in Mandaluyong. I was actually the first to arrive because I found it necessary to leave home early so that I won't be late for the 6pm event. I know how traffic is very bad especially along Edsa so I arrived at Robinson's Cybergate at a quarter to 5. I stayed there and explored the mall as well as asked for directions to the hotel because it was my first time around that address. At about 5:30p, I proceeded to get to the location.

When I arrived there, I saw this cluster of Filipino inspired old house villas smack dab in the city right next to tall buildings. I had finally arrived. Lola Maria restaurant is the main outlet of The Legend Villas as I was to know later on. I timidly went forth and looked for the restaurant. I finally found the restaurant and when I went inside, I introduced myself and was very well taken cared of. They handed me my name tag and I took my seat. I was the first to arrive. The people at the Legend Villas were all very pleasant and warm that I didn't feel ill-at-ease at all. I was in fact very comfortable. Once seated, I then inspected and took a look around my surroundings. The interiors of the restaurant were very well and comfortably lighted. The restaurant exuded a cozy warmth which was very inviting. The restaurant had very traditional wooden furniture really in keeping with their theme of being Filipino. Admittedly, I am not really so into Filipino cooking and I was interested in what Lola Maria had to dish out for their guests.

A few moments later, a few other of the food tasting guests arrive and we got to talking about the food which was about to be served to us. We were then given menu cards on the 8 celebrity dishes that Lola Maria was going to be introducing for 2011 and I was amazed at the list and couldn't wait to get started. I had expected a fully Filipino repertoire of dishes but that wasn’t quite the case. We were going to have it degustation style so we could sample all 8 offerings from their resident chef. These dishes are so-called "Celebrity Dishes" because they were collaborated on by Lola Maria's chef and the family's close celebrity friends. I say family because the restaurant and the hotel are 100% Filipino owned under the Legend Hotels International Corp..

For starters, we were offered 3 small portions of their signature drinks for us to choose on 1 drink which we would like to have all throughout the meal. There was the Pandan ice tea (ice tea with hints of pandan), the pomelo and pineapple slush and the dalandan slush. They were all good and refreshing drinks and I chose for my meal the Dalandan slush for a light and refreshing alternative and because I love Dalandan. 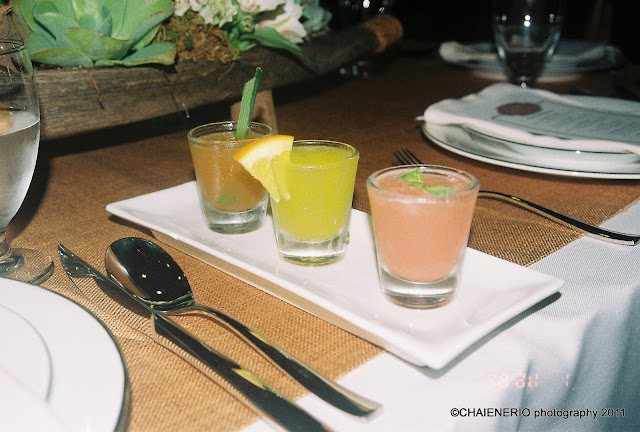 The first celebrity dish which was introduced was the Vegetable Quiche suggested by Randy Ortiz. Although it is not really Filipino in origin, the dish makes use of produce we can easily get from our supermarkets. We were served 2 small portions and one had a dollop of sour cream on top. I liked it. It was very light and I especially loved it without the sour cream because the flavors were more pronounced than when they were eaten with sour cream. Very light and I loved how the vegetables tasted in this dish. Even kids would love it. This one is priced at Php155/5 pcs. Not bad with the pricing for good food. 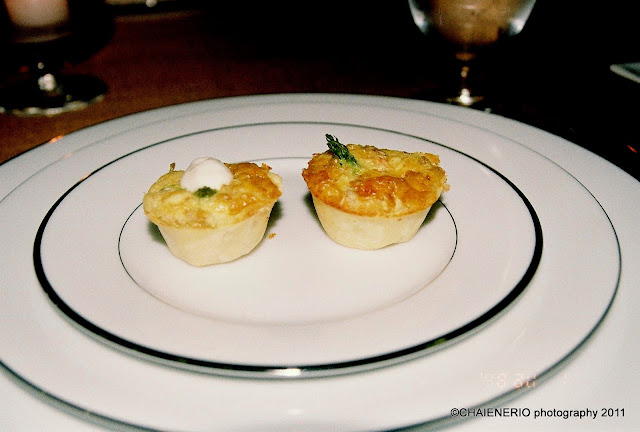 Next was the Fish Pinipig by Iza Calzado. It was served in shot glasses which contained their dipping sauce and lightly sprinkled with cayenne powder to give it a little kick. On the side were thin slivers of potatoes which were fried. You could say that this dish was the Filipino version of the Englishman's fish and chips. I loved this dish and even asked for seconds. When you bite into it, you encounter the crunchy crust made out of pinipig flakes and then next you encounter the meatiness of the fish together with the kick from the cayenne. The sauce was really good with it. This was one of my favorites among the 8. Really simple but well put. Price: Php210/6 pcs. 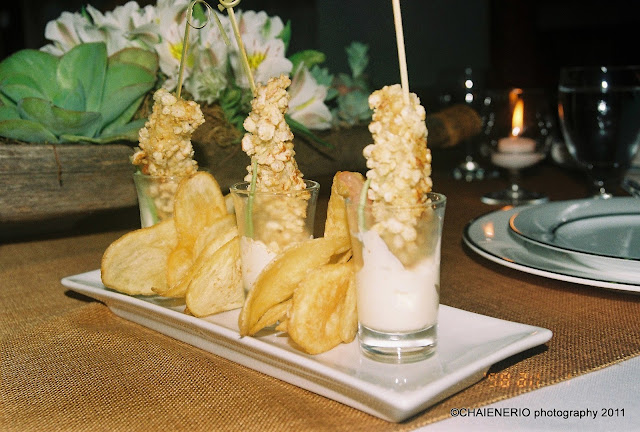 3rd on the menu was the Prawn Cake by successful local show car maker Atoy Llave. We were served prawn balls, degustation style. They were served together with some Hoisin sauce. The blending was really great. The dish was delicious and I also had seconds of it. Meaty prawns minced and coated with bread crumbs before frying. You could say it was kind of comfort food. Very easy to prepare and actually, this would be a great addition for cocktails. Price: 225/6 pcs. 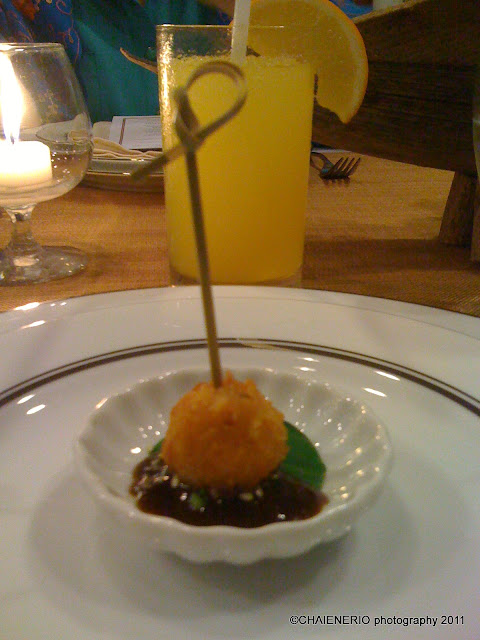 After the prawn cake dish, we were then served a calamansi sorbet to cleanse the palate. Very very cool and refreshing and now I am again ready for another batch....:)

Our 4th dish is the Cocido from Anton Diaz of OurAwesomePlanet. After hundreds of years of Spanish occupation, we have adopted a lot of Spanish dishes and this one is very traditionally Spanish. It is beef ribs stewed in a rich tomato sauce with chorizo and fresh vegetables. This dish was as hearty as it could be. The beef was so tender that I had no problems eating it and the sauce was really good. This kind of made me full. The vegetables that went with it were so carefully cooked that they were just right. Also served together with the Cocido was an eggplant dip which was a revelation. The dish tasted so much better with it. The eggplant lent smokiness to the beef which was great. The chorizo in the dish added to the heartiness and lent additional flavor to the stewed beef ribs. This one I also dub as family comfort food. Price: Php360/ single serve. 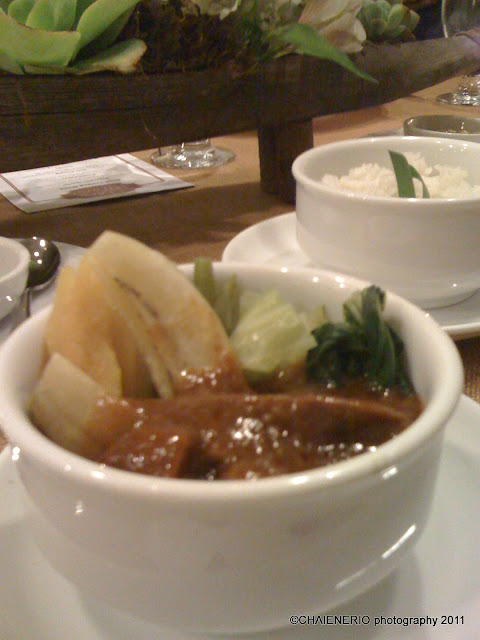 By now I was already full but wait till you get to the 5th dish we had. Rosemary and garlic rib eye steak from Ara Mina. I had mine cooked medium rare and I wasn't disappointed with this cut of beef. The beef itself was so good to eat and so tender as well. Even without the shiitake mushroom sauce which was served with it, I could eat the meat by itself. It was that good. I had red wine to go with the steak. The chef told us that the beef was just seasoned with salt, pepper and garlic and was coated with rosemary infused olive oil before it was grilled. We were asked if we would like some mashed potato or garlic rice with it but I steered clear of the rice and got the mashed potatoes instead. The real mashed potatoes. I finished every one bit of the steak and felt satiated and ready for dessert. Price: Php650/ single serve. 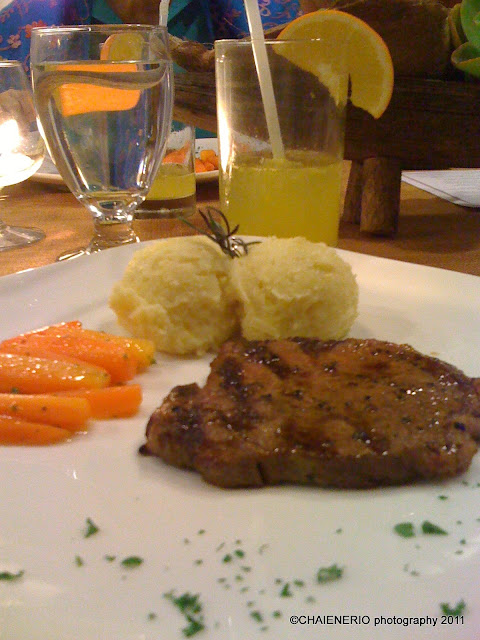 I have nothing but good things to say for all the dishes so far, they were all that good to me even if they were not all Filipino in origin. The ones that stood out for me were the Fish Pinipig, Ensaymada Pudding and Sumat at Tsokolate which I thought were very Filipino with their own twist.

For dessert we were given a trio sampler of all their new celebrity dishes. They were the Ensaymada pudding by Ford supermodel winner Danica Magpantay, Ube and Langka Panna Cotta by Sherilyn Reyes-Tan and the Suman at Tsokolate by Wilma Doesnt. 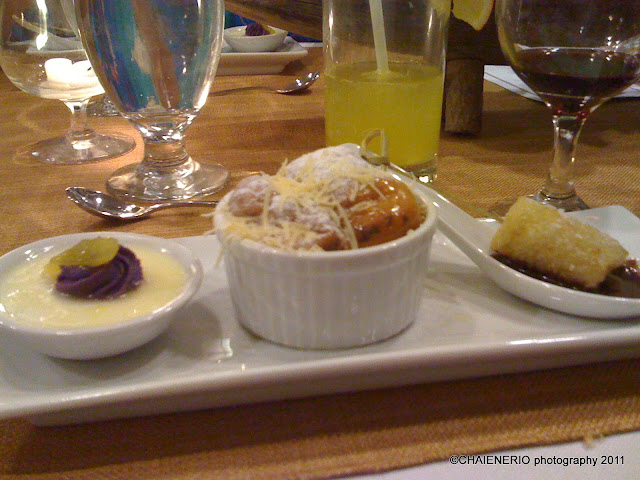 The desserts were what I thought essentially Filipino in thought and I think best highlights Lola Maria’s offerings. I wasn’t really expecting the mix of foreign cuisine there because I thought they were showcasing Filipino dishes but it was all still good. My experience was nice and very filling. I got home and took an hour break to digest all that I had partaken of. It was that filling.

Please don’t take just my word for it but try and drop by the restaurant to form your own conclusions.

A little bit of tidbit though, they have a sinigang and lechon kawali station during their lunch buffet of which I really want to try.

Nice BisayaInManila! But why did you get a name tag?

Hi Matthijs, I think they just sort of wanted everyone to somehow get to know each other...:) hahahah! it was pretty funny though. It was like I was attending a seminar of sorts..:)