For the die-hard foodies, you guys should have heard of this recent development in Manila's food scene - the recent opening of Bon Chon Chicken at the Ayala Triangle Gardens. For the unfamiliar peeps, here is a little introduction about Bon Chon Chicken. 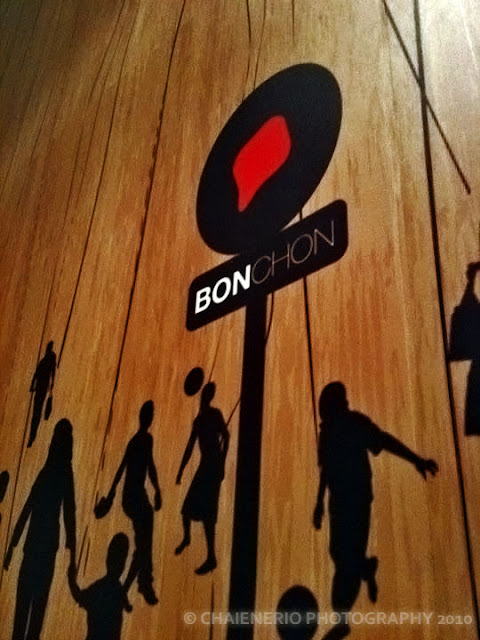 Bon Chon Chicken is actually a South Korean based fried chicken franchise which is a food favorite of the New Yorkers. Bon Chon Chicken differs from the typical fried chicken dish because it has been marketed as the healthy fried chicken which has been double-fried which gives it a lighter and more crispy skin on the outside and moist chicken meat inside plus the fact that it has ginseng as an ingredient in its secret sauce. They say it is healthier than the usual fried chicken but I'm not sure to believe this marketing hype because of the fact that I know it's double fried. :) How healthy can you get?! But regardless, this merited a visit from me and friend V.

Already, the diners were piling up when we got there. We were afraid that the seats were all taken up but we grabbed a corner table and finally we got to try this Korean fried chicken wonder. The restaurant gives off the ambiance of a classier fastfood but it is still a fastfood joint.

We ordered their Drumstick platter (3 pcs. of drumstick with their soy garlic sauce) at Php185.00. It was as it claimed to be. The chicken skin was super crispy and it seemed like they didn't even use flour for the coating. Super thin and super crispy. I liked this aspect of it. I wanted more sauce though on it because for me, the sauce  was quite lacking and I wanted more. 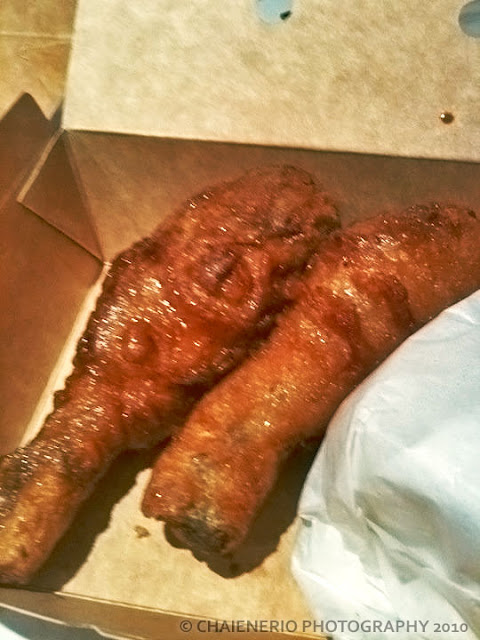 We also got their chicken wings platter (3 pcs. of chicken wings with the hot & spicy sauce) at Php 130++ ( I can't remember the exact price, my apologies). The 3 pieces of chicken wings were quite little so I do suggest that you order the 6 pcs small-sized wings so you won't feel dejected. Heheheheheh!  :) 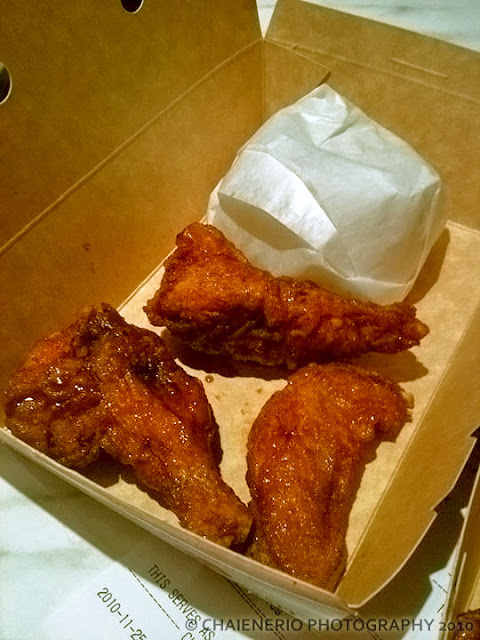 I wasn't able to try out any of their side dishes as we were in a hurry to catch our movie at nearby Glorietta so I will definitely go back to eat some more Bon Chon Chicken. I wasn't satisfied with that 1 visit. I need a few more! Hehehehe!

In Bisaya, "pagkanipis sa panit sa ilang manok uy, mura man wala gibutangan ug harina sa pagprito. Mubalik pa jud ko para mutilaw nasad usab" (Their chicken skin was so thin and crispy that it feels like it wasn't coated with any flour during frying. Will definitely go back to taste some more.)

Happy Christmas meals everyone! 'Tis the season to eat and be merry! Diet is suspended for the time being! Yey!

Bon Chon Chicken is located at Ayala Triangle Gardens beside Banapple!
at December 23, 2010

thumbs up for Bonchon :D

Chicken wings tasted ok but it was extraordinarily crispy. :) Liked Soy Garlic more than the spicy ones.

Visited the Ayala Triangle branch and took some pics:

Yeah, they were ok. I wouldn't really say they were super great. :)