You might be thinking where in the world did I find out about this place. Actually one weekend my friend K flew over here from HongKong and we were out partying the whole Saturday night. Met with some Cebu friends and they were as entertaining as ever. The morning after we were going to Las Pinas to meet one of K's friends 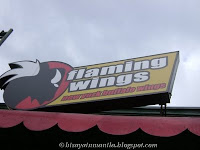 but she was unable to make it so we decided to have brunch in this quaint resto that friend K suggested. She knows one of the owners of the bar. It is owned by a group of friends. 3 actually and it has become quite successful that it now has 2 more additional branches aside from its main branch here in BF Homes. 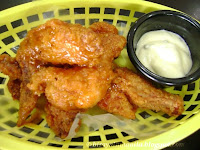 It is Flaming Wings. Their specialty is buffalo wings hot off the fryer with delicious sour cream dip. So friend BV, K and I drove down to BF homes and set about to finding the resto. At first we were quite lost but then after a few minutes we were able to find the restaurant. With its signage on the top and of course its pronounced red door. We parked and I was headed off to check out the menu. They had this 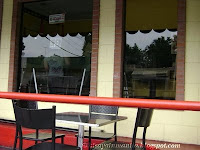 glass menu board which listed all their menu items and the prices as well in colored pens. That's me in reflection checking out the menu and photographing it as well. It was a small but cozy place and after a while, its regular patrons in flip flops and shorts arrived and were eating their lunch there. We got to have a corner table. I ordered their best seller which was 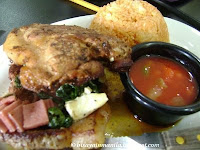 the stuffed pork chop and was it oh so yummy, so rustic, so delicious and friend BV ordered their adobo flakes and all of it was just yummy, filling and the price not too bad. For dessert we had Oreo baked in a crust together with vanilla ice cream, sort of like Oreo ala mode. The pork chop I could not even finish because it was so plenty for one serving. It was like 2 pieces of pork chop with cheese filling and salsa on the side. We finished the meal and were so sleepy that 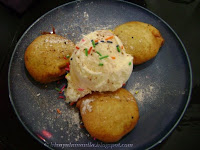 we decided to just sleep in friend K's tita's place in Las Pinas. We had a wonderful weekend. Full of good friends, good conversation and of course good food! So foodies out there, check out 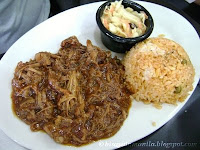 Flaming Wings at BF Homes, Taft (near de la Salle) and the other location is in Katipunan near Ateneo. 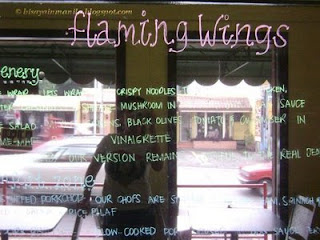